Liquor Locker is a small chain of liquor stores in California, owned by a father, Rick, and his two sons, Andy and Amar. This family business was born out of Rick’s inspiring immigration story. When he first came to the United States, he worked seven days a week at a nationally known convenience store brand. In testament to his hard work, he was quickly promoted to a management position. Over the years he continued managing the store and saving his money, until he was eventually able to open his first liquor store, a tiny location in Modesto, CA. Rick was raising his young sons and working to build up his business when he noticed the owner of a 10-store local liquor chain coming in from time to time. He was always impressed by Rick’s high level of customer service and would joke that he was afraid one day Rick would be his competition. Fast forward to today and Rick, Andy, and Amar certainly are the competition! In fact, they now do more than double the business of that early competitor with their chain of 8 liquor stores—and they’re busy working towards the goal of having 20 stores in their operation. Rick and his sons have a lot to be proud of, including being named one of the country’s Top 100 Retailers in 2019 and 2020 by the national publication Beverage Dynamics.

Through sheer determination and hard work, Rick and his sons have built a strong business of 8 stores and growing. But to get to their goal of 20 stores, they knew they would need to replace their cash registers and credit card terminals with a point of sale (POS) that would help them streamline operations. It had become a struggle to keep up with reporting and inventory, running manual reports, inputting information, adding numbers, and checking stock to ensure they didn’t overlook anything. Even with three of them, the time it took to complete these operational tasks and travel between locations was overwhelming.

Liquor Locker had participated in a demonstration of Exatouch® Point of Sale along with many other POS solutions. They compared each system carefully, weighing their options and asking their local representative Nick at Electronic Payments of California, Electronic Payments’ partner on the ground, about different scenarios and potential pitfalls. In the end, Exatouch came out on top as it was able to handle the functions Rick and his sons needed—and they saw a system they could grow into as the business continued to expand.

Ease of use was key as their ever-growing staff would need to be comfortable with the system. Another important component taken into consideration was that Exatouch’s development tends to be much faster than other POS systems on the market. With a team dedicated to continuous improvement and implementing feature requests based on real need, Electronic Payments shows their commitment to their merchant partners. Finally, with hands-on support at the local level through Nick—backed by Electronic Payments’ 24/7, in-house technical support—Liquor Locker knew they would be in good hands. 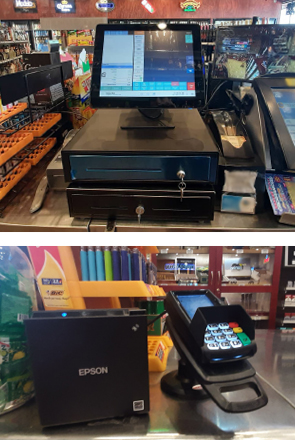 Since installing Exatouch, Liquor Locker has a simple, intuitive system that makes it easy to train new employees. The staff is taking advantage of the system’s automatic age verification, quick lotto payouts, and support for CRV, California’s redemption program for bottle deposits. And now, with just a few taps of the screen, the team can check shoppers out in a flash and customers are thrilled to be able to get in and out quickly at any time of the day or night.

Rick, Andy, and Amar are excited about Exatouch’s pricing module with printed shelf labels that help the trio maintain consistency across their operation. After using the system for several months, they’ve been able to take the time they were spending on reports and inventory management and invest it in other areas of the business. “Exatouch has made not only our day-to-day operations faster, it’s put us in a better position to handle the growth we’re experiencing,” said Rick. “We love the way it looks and what it does for us!”

“Exatouch has made not only our day-to-day operations faster, it’s put us in a better position to handle the growth we’re experiencing. We love the way it looks and what it does for us!”

Rick and his sons estimate they’ve saved hundreds of hours on managing operations since installing Exatouch. And they’re noticing an increase in sales now that the checkout process has sped up. The owners are also seeing that with a system that tracks employees, they’re able to detect any potential theft to mitigate loss.

“We estimate we’ve saved hundreds of hours on managing inventory and pricing since installing Exatouch—and we’re noticing an increase
in sales now that the speed of checkout is faster.” 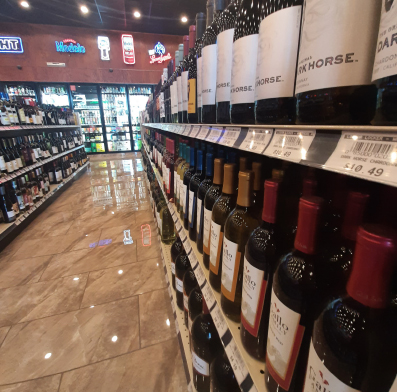 With so many businesses around them hurting from losses sustained during the pandemic, Rick and his sons are fortunate that their business has experienced growth since the onset of the coronavirus. “We’re thankful we had Exatouch in place to help us quickly handle the added business and get customers on their way swiftly—especially since government mandates allow only a certain number of customers in the store at a time,” they said.

The owners have faced challenges keeping certain inventory items in stock and they’ve had to put extra employees in every store to help maintain cleanliness for both customers and the staff. Fortunately, Exatouch’s employee and inventory management features make quick work of these responsibilities.

When asked if they would recommend Exatouch to other businesses, Rick and his sons say not only are they recommending the POS, so are their vendors! Nick, Electronic Payments’ partner who services Liquor Locker locally, was helping a nearby resort choose a POS for their business a short time ago. While discussing the benefits of point of sale, the resort owner pulled out his phone to show Nick a photo of Exatouch and said he wasn’t sure where he could get this particular POS, but one of his vendors had highly recommended it. Turns out that Liquor Locker recommended Exatouch to their vendor because of the awesome pricing and shelf label tools, and that same vendor works with the resort and passed along the insider information! The shelf labels have barcodes on them, which makes it easier for vendors to go through the store and create purchase orders. Not only does Exatouch save the merchants time, it even saves their suppliers time! In a local community of small businesses, word gets around quickly about smart and affordable tools that help entrepreneurs grow their operations.

Find out more about Exatouch and how it can save your business time and money! Schedule a free demonstration at your convenience:

It’s Beginning to Look a Lot Like Gift Card Season

Gift cards are a smart way to expand your brand, reach new customers, and make more money all yea...

Read about how this local Italian restaurant and pizzeria installed a POS to serve customers fast...

Learn what key POS features to look for when selecting a system for your convenience store.

Q1 2022 Technical Support by the Numbers

What Are the Benefits of a POS System?

View a list of 20 key benefits a point of sale offers entrepreneurs, from saving time and reducin...

Want articles about growing your business delievered right to your inbox?

Subscribe to our blog and we'll keep them coming!

Thanks for your interest in Electronic Payments' blog, On The Record !

We'll deliver new posts right to your inbox as soon as they're published. Stay tuned for ongoing tips, advice, and strategies you can use to grow your business!

Have you ever felt that your concerns were not heard? Or your needs were not met? Or you were let down? Or, have you been overly impressed? Pleased with a tech support call resolution? Or had an awesome experience with one of our sales representative, ISO Offices, or Relationship Managers?

It can sometimes be difficult to get an answer or a sensitive ear for an issue you may be having. Or, you may just need help reaching the right department. Who handles paper shipments? Who programs my equipment? What if I don't like my sales rep? How do I reach your CEO? Sometimes, it just helps having a direct email address which goes to a person that can "get the job done."

The Ombudsman is a position at Electronic Payments that is your conduit to the proper channels and persons that can field your request, answer your need, and receive your compliment. Fill out the form below and we'll try our very best to assist you as quickly as we can.

Thank you for reaching out to Electronic Payments' Ombudsman!

We're human, promise! And your issue is important to us. While this is an auto-response, a real human has received this email and will direct it to the right department so you can get the attention necessary to help with your request. We'll be in touch soon. In the meantime, here are several avenues of help we offer:

Talk to you soon,
The Electronic Payments Team

We use cookies on our website to give you the most relevant experience by remembering your preferences and repeat visits. By clicking “Accept All”, you consent to the use of ALL the cookies. However, you may visit "Cookie Settings" to provide a controlled consent.
Cookie SettingsAccept All
Manage consent

This website uses cookies to improve your experience while you navigate through the website. Out of these, the cookies that are categorized as necessary are stored on your browser as they are essential for the working of basic functionalities of the website. We also use third-party cookies that help us analyze and understand how you use this website. These cookies will be stored in your browser only with your consent. You also have the option to opt-out of these cookies. But opting out of some of these cookies may affect your browsing experience.
Necessary Always Enabled
Necessary cookies are absolutely essential for the website to function properly. These cookies ensure basic functionalities and security features of the website, anonymously.
Functional
Functional cookies help to perform certain functionalities like sharing the content of the website on social media platforms, collect feedbacks, and other third-party features.
Performance
Performance cookies are used to understand and analyze the key performance indexes of the website which helps in delivering a better user experience for the visitors.
Analytics
Analytical cookies are used to understand how visitors interact with the website. These cookies help provide information on metrics the number of visitors, bounce rate, traffic source, etc.
Advertisement
Advertisement cookies are used to provide visitors with relevant ads and marketing campaigns. These cookies track visitors across websites and collect information to provide customized ads.
Others
Other uncategorized cookies are those that are being analyzed and have not been classified into a category as yet.
SAVE & ACCEPT
Powered by